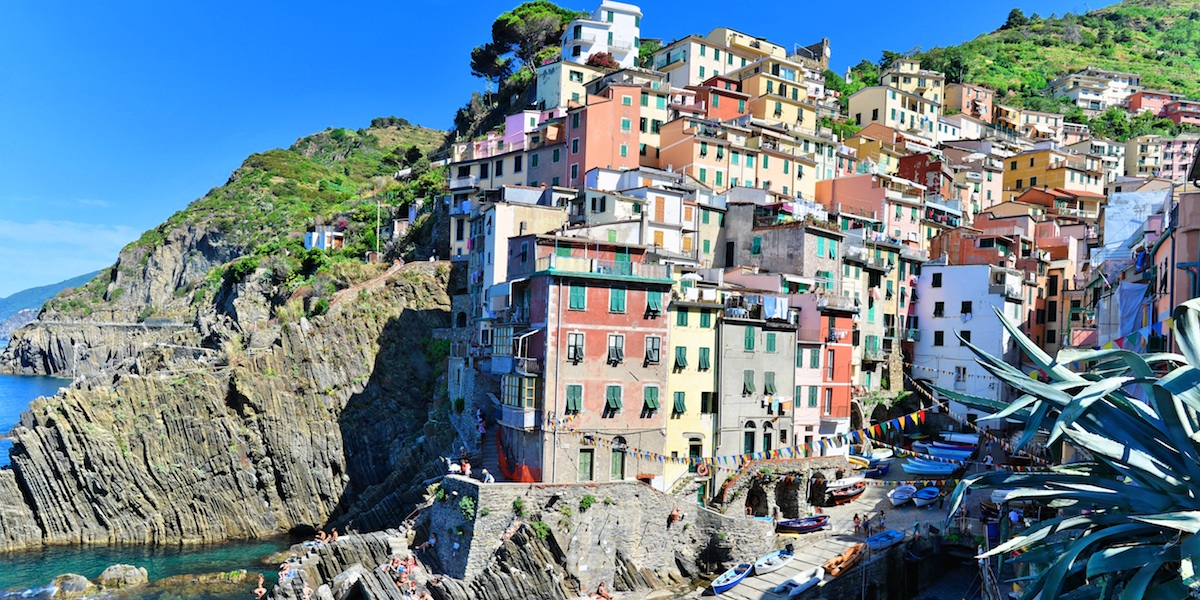 Green hills overlooking the sea and five beautiful, small villages: this is the coastal landscape of the Cinque Terre, consisting of the villages of Monterosso, Vernazza, Corniglia, Manarola and Riomaggiore.
The five villages are arranged in succession along a hilly coast characterized by terraced slopes covered with vineyards. The coast of La Spezia is characterized by a wonderful landscape made of hills, perched villages, cultivated land in steep areas and hidden coves. For these and many other reasons, UNESCO declared the Cinque Terre with Portovenere and the islands of Palmaria, Tino and Tinetto, Heritage Site.
The largest of the five towns is Monterosso, whose center grows close to the sea and climbs up over the mountain. The sandy beaches which are on the east and west side of the sea port are one of the major tourist destinations of the Cinque Terre, but also the streets, meandering among the ancient buildings of fishermen, are one of the biggest attractions for visitors. The scent of the sea blending with that of the flowers, so numerous in the local flora, makes a walk in the Cinque Terre magical and fascinating. In particular, the paths that connect some of the suburbs are the real reason for the trip to the Cinque Terre, as they run through beautiful stretches of coastline boasting magnificent views of the sea. Some of the centers are in fact accessible only by stairs and streets that climb the mountain and that determine the incredible charm of a landscape that has retained its identity over time.The famous terraces overlooking the sea, visible from almost every point of the Cinque Terre, derive from the precise work of the Benedictine monks in the eleventh century, to which was added later farmers work: the need to cultivate the rugged coastline, which resulted by the lack of plains territory, was made possible by terracing. This method of construction, along with the help of a favorable climate, made it possible to do take root the screw from which is obtained, among others, the famous wine Sciacchetrà . Very valuable is the olive oil obtained from the olive groves whose original structure dates back to the Middle Ages, also grown on terraced land.
A splendid excursion to wander the Cinque Terre is definitely the blue path (sentiero azzurro), a road that rises 30 meters above the sea level and connects all five villages: the entire route , about 12 km long, is composed of paths, stepped and cobbled mule tracks, internal roads and a stretch of waterfront (“La Via dell'Amore”). The total uphill altitude difference of 500 meters, for this reason it is appropriate to consider in detail the various sections : the one represented by the Way of Love shows no height difference and it takes 20 to 30 minutes. The section 2, which goes from Manarola to Corniglia, reaches a height of approximately 50 meters and the time necessary to follow it is 1 hour, for a total of 2 km. The section 3, which runs from Corniglia to Vernazza, has a vertical drop of 200 meters, the path is 4 km and takes at least 1 hour and 30 minutes of walking. The section 4, which leads from Vernazza to Monterosso, is the longest: it is a path of 3 km, with a vertical drop of 200 meters and an average hiking time of two hours, recommended for experienced hikers. To move along the blue trail takes at least 5 hours and 30 minutes, but the amount of time is higher if you want to make some brief excursion inside the villages . Precisely for this reason those who want to get in the way it is advisable to split the journey in stages, pausing to Cinque Terre at least a few days.
Among the most significant events that take place in the area of the Cinque Terre it is noted “L'Aria Festival”, an event that involves street artists of international level: since the period in which the festival takes place is variable (usually between December and January ) you can visit the website www.ariafestival.it . Another event not to be missed is the one with the nativity scene of Manarola, " the largest nativity scene in the world", every year since December 8th.