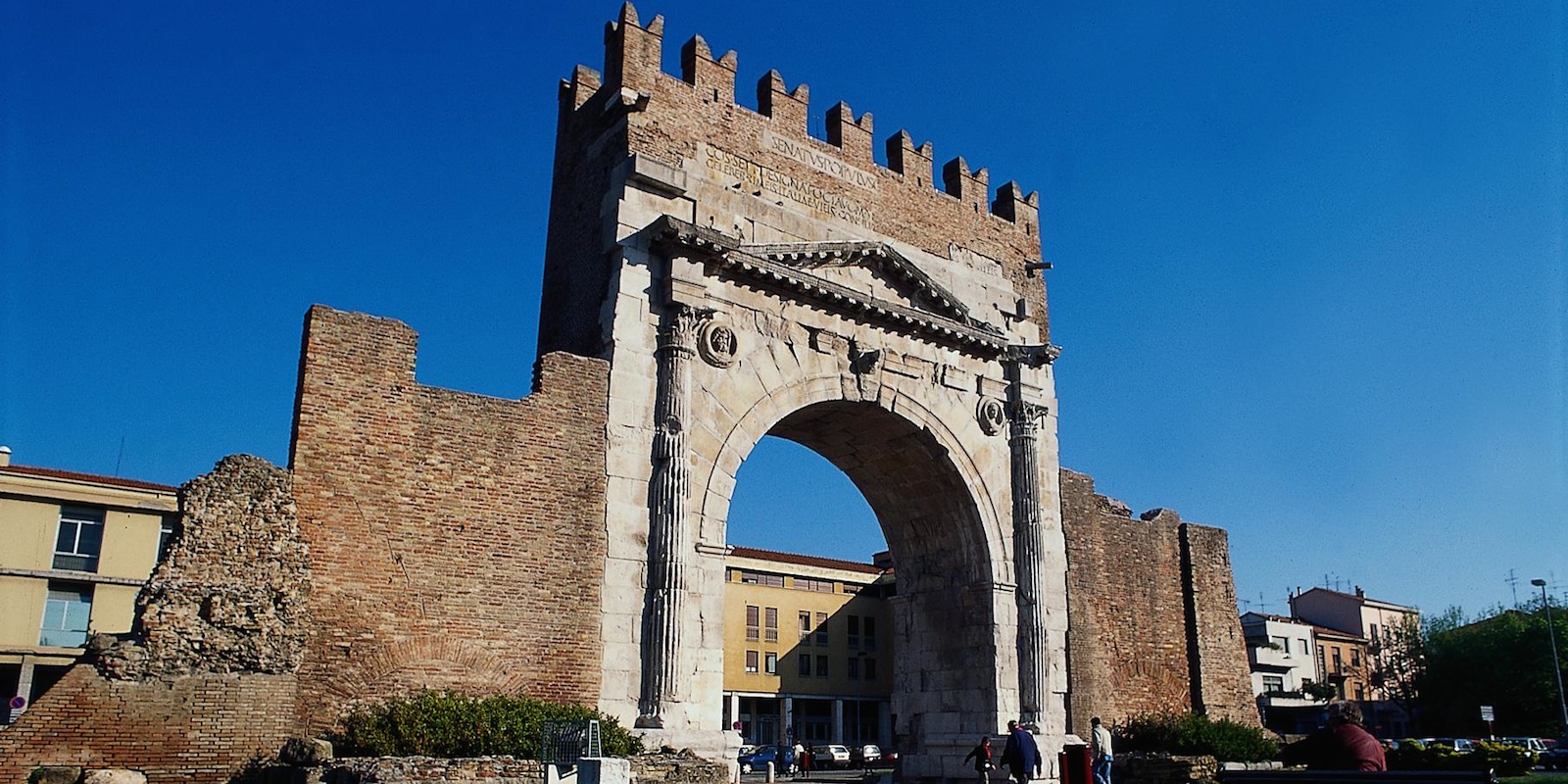 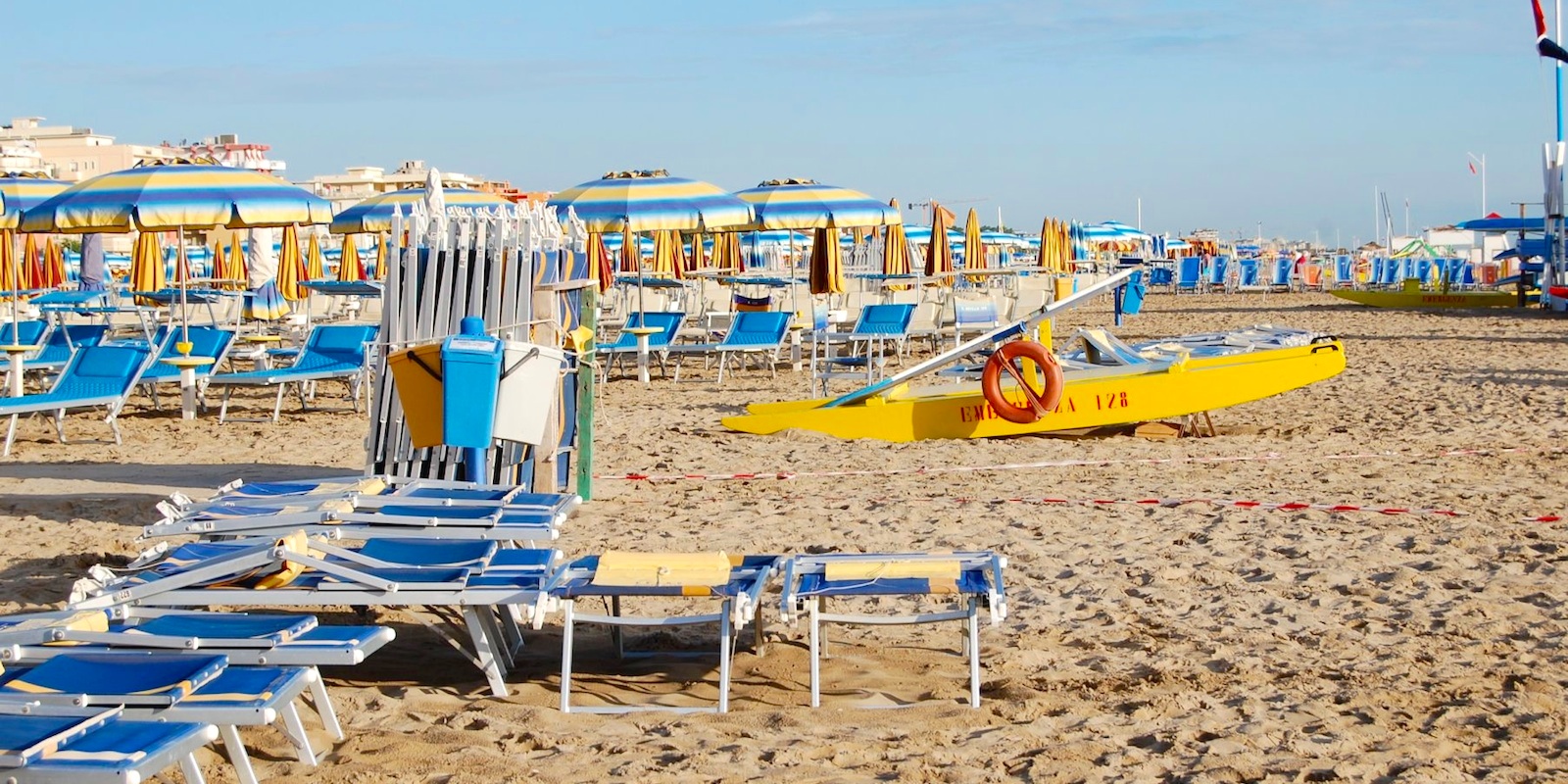 Rimini is without a doubt the most important seaside resort of the Romagnan coast - miles of fine sunbathed sand beaches. It is rightfully described as a nightlife hotspot.

Such, however, is only one of the aspects of a city that bears flourishing Roman, Medieval and Renaissance pasts, and occupation by the Goths and Bizantines. At the beginning of the 11th Century, the city's fortune was on the rise, finally culminating with the flourishing period of the Renaissance and the rule by the House of Malatesta.

The Arch of Augustus, dating back to the year 27 BC, is the most ancient Roman arch still standing today, while the Amphitheatre and the Tiberian Bridge, with five arches, are still in use. Not only, but other rich finds here include the archaeological complex that is the Domus del Chirurgo (or Surgeon's House). The relevant doctor operated here in the 3rd Century A.D., and his inventory was actually found sealed beneath a collapsed heap, apparently a result of a fire during the first Barbarian incursion. Today, it is preserved in the City Museum. Sophisticated mosaics, frescoes and furnishings were also found.

Testimonies from the thriving Medieval period in the Province of Rimini are exhibited in Palazzo dell'Arengo, and include the splendid 13th-Century frescoes in the Church of Sant'Agostino - a masterpiece by the prolific school that found its main inspiration in the work of Giotto and in the Byzantine Abbey Church of Santarcangelo.
Between the 1200s and 1300s, this terrain was dominated by the Malatesta line, one of the most powerful families of the day. Malatesta dominated diverse regions of Italy, but the family's stronghold was always Rimini.
Under them each inland village became a castle, and the arts and culture flourished.
The Malatestian Temple is indeed one of the treasures of the early Renaissance, with a façade designed by Leon Battista Alberti and artworks by Giotto, Agostino di Duccio, Piero della Francesca and Vasari.
Sigismondo Pandolfo Malatesta built his own sumptuous residence not far from the Tempio in 1437: the Castel Sismondo, restored and still dominating the scene of central Rimini today.
Malatesta is the name of the historic region that formed in the southern corner of Romagna, between the Adriatic Sea and the Montefeltro Hills (domain of the Duchy of Urbino) between the Middle Ages and the Renaissance.
In the 12th Century, the Malatestas (also cited by Dante Alighieri), from their Verucchio and Pennabilli strongholds, began to consolidate their power in the valleys of the Marecchia and around Rimini Province.

The two main representatives of each of the area's rival clans did battle one with the other in the mid-1400s: Sigismondo Malatesta and Federico da Montefeltro.
The two powerful lords renewed the feudal system in these lands, made up of citadels, castles and towers, but they also had fresh structures erected that have remained in the art and European culture history books: San Leo, Verucchio (with a must-see civic museum housing remnants of the ancient Villanovian Civilization), Santarcangelo, Torriana, Montefiore, and Mondaino, to name just a few.
These fortified borgoes still preserve the charms of nature and history intact, via their historic centers and museums hiding away the signs of pasts both ancient and recent.

Along the Riviera Romagnola, one encounters Rimini, Riccione, Bellaria Igea Marina, Cattolica and Misano Adriatico, seaside resorts known around Europe, thanks to the efficient and modern touristic structures.
The beaches here please all ages with their fine sand and low seabeds.
Yet the Province of Rimini is not just for summertime: 470 hotels are open throughout the year, as it is an important scene for convention and business tourism, welcoming guests to high-quality infastructure, including two convention centers and an international fair complex.
Not only, but amusement and water parks, hundreds of clubs and discos, various golf courses, and an international speedway that hosts MOTOGP add to the reasons to visit the province.

An explosion of events take place year-round to match: concerts and musicals, theatre and cinema festivals, art exhibits and sporting events, cultural encounters and sagre dedicated to the best of local enogastronomic products and traditions.
All points along the coast and inland compete to entertain visitors in ever more engaging and fantastical ways.
Attractions 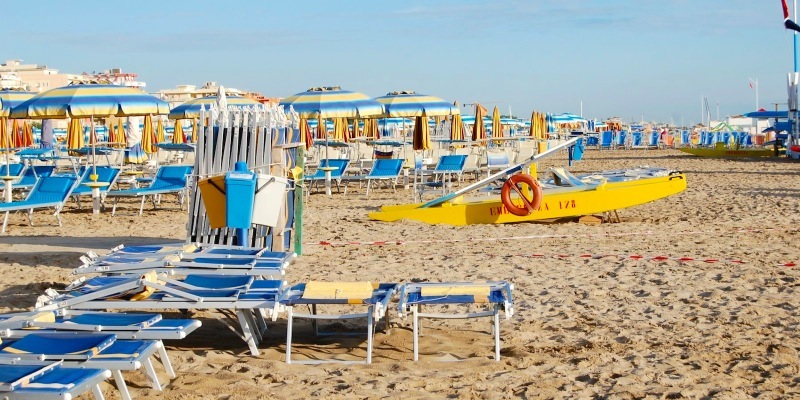 GETTING AROUND IN Rimini

The bus network in Rimini is very widespread. You can use it to go everywhere in the city, but also to reach nearby cities. During high season, some buses run 24 hours. The main lines (4 and 11) which cover the entire coast of Rimini (4 North, 11 South) connecting it with neighboring cities, run from 5.30 am to 2 am every 15 minutes along the promenade. Bus stops are only on request. Almost all of the path changes take place at the train station, which is in the city center. The cost of a ticket purchased in tobacco shop (90 minutes trip with possible connections) is 1.20 euro. One way tickets bought on board cost instead 2 euro. If you plan to do more than 2 rides, consider the opportunity to purchase a 3 euro day pass. The nights from Friday to Saturday and from Saturday to Sunday in July and every night in August every busses offer a night service for which tickets can be bought from the driver, cost 5 euro and are valid until 7 am.

If you choose to take a taxi, a short ride on the seafront costs around 10 euro (15 at night).

If you use your car, consider that in the city there are also many parking spaces on the waterfront, but they have a 30 minutes time limit (just to unload luggage). At about 500 meters from the seafront, however, there are some free parking slots.