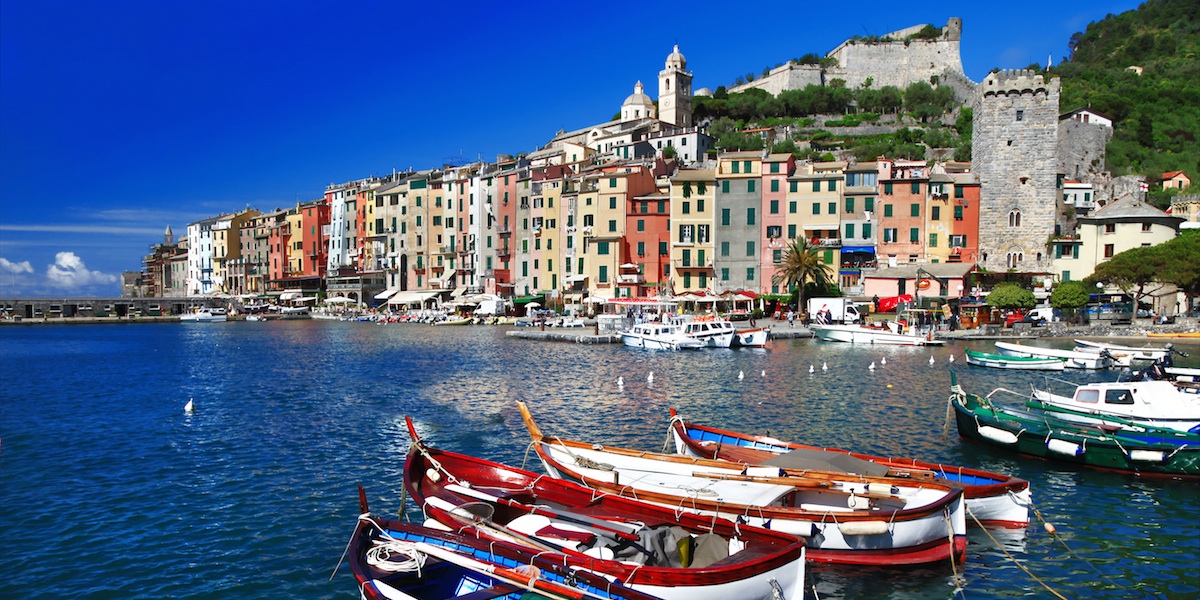 What to see in Portovenere

The "Palazzata"is characteristic of Portovenere, it's a row of tall and colored houses built close to the rock, clearly visible from the pier of the marina (the "Calata"). From here, a system of stairways, the "capitoli", will put you in the alley of Via Capellini, the main axis of the historic center full of shops, restaurants and where you can taste and buy typical products of Liguria. On the eastern limit of the road you will find the well-preserved medieval gate (dating original is written in the "Cologne Januensis 1113") and surmounted by the towered coat of arms of the city, while below, remain the signs in the marble used to measure the wine and grains. To the left of the door, along the walls, you can see the Tower Chapter House made of ashlar. Returning to Via Capellini you can advance in the village taking the different lanes that will make you walk in the medieval system of the village and discover interesting corners. Do not worry about getting lost...all roads go back to the sea!

Taking one of the boats that depart from the "Calata", you can do the charming tour of three islands: Tino, Tinetto and Palmaria. The tour takes 40 minutes and allows you to circumnavigate the small archipelago of the Regional Natural Park of Porto Venere admiring the Mediterranean nature and the numerous caves that are open to the sea (only 36 are those of Palmaria!): among the most famous the Grotta Azzurra (Blue Cave), the Grotta dei Colombi (Cave of the Doves), with prehistoric finds, the Grotta Arpaia (also known as Byron) immediately beneath the church of San Pietro. On the island of Tino, now a military zone closed to the public, stands a beautiful lighthouse and are visible the ruins of the Benedictine abbey of San Venerio built in the eleventh century. On Tinetto you can see the ruins of a monastery of the sixth century.

Built for wish of the Genoese, the church of San Lorenzo was consecrated by Pope Innocent III in 1130. Over time to the Romanesque system were added a series of remakes: the adaptation of the facade to the Gothic style with the division into horizontal bands of white marble and blacks, and the redefinition of the central door, framed by twisted columns and a lunette carved in bas-relief with the martyrdom of San Lorenzo (St. Lawrence). In the sacristy can be visited the sacred art museum with a collection of jewelry, paintings or religious objects of the sixteenth and seventeenth centuries.

Palmaria is the largest island of Liguria and can be reached in 10 minutes by public and private ferries that depart from the pier in Portovenere. Besides the beaches with crystal clear water, the island is famous for a vast network of trails that allow you to walk around it fully (2.5 hours, the estimated time for the full tour) through both areas of unspoilt nature, and caves, and the two villages of Terrizzo and Pozzale. The view of Portovenere and of the Gulf from the summit of the island is really suggestive. The island also hosts three castles of the nineteenth century: Forte Cavour, Forte Umberto I and the Batteria del semaforo. The forts are visible only from the outside because they do not open to the public.

Walking down the steps lining the north walls, you come to the imposing fortress built by the Genoese in 1162 and almost totally rebuilt in 1453. The complex, with irregular plan, is the result of the integration of two overlapping buildings and several refurbishments, to the latest bastions of the seventeenth century. Inside there are the Sala Ipostila with ceiling vaults supported by massive stone columns, and the Captain's House, the highest body of the building, where lived the warden or "Capitano del popolo" (Leader of the people). Through a side terrace you can access the walkway that overlooks the sea, see the louvers for muskets that were the defense system outside of the castle and admire the circular tower equipped with sentry box that housed the sentry post on duty. In the Napoleonic era, the fortress was used as a political prison.

You can not leave Portovenere without visiting The church of San Pietro on the top of the promontory, in a picturesque and romantic setting. The basilica, built on the ruins of an existing building (perhaps a temple dedicated to Venus Ericina, hence the name Porto Venere) is the result of the integration of a first early Christian church and the thirteenth-century Gothic church. The semicircular apse of the older church, built with black marble of island Palmaria, is recognizable on the right side of the perimeter wall, the most recent church is characterized by alternating black and white stripes, two-tone typical of the Gothic - Genoese that is also found inside where the buildings are connected by two round arches. In 1494 the church suffered heavy damage made by the Aragonese. In the Napoleonic era, by now disfigured, was used as a political prison. Restored during Fascism, now retains all its charm standing out like a beacon on the horizon, precipitous between sky and sea.