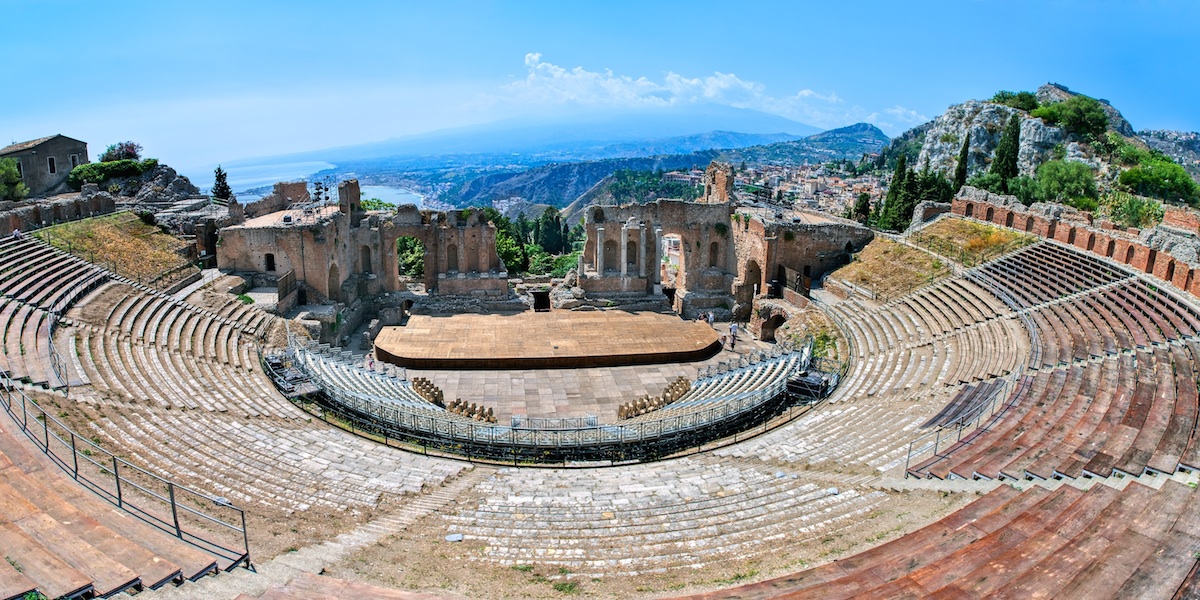 On the top of a mountain, in front of the sea

Taormina is a medieval town situated on the top of Mount Tauro, at 250 m above the sea level. The city centre is surrounded by fortified walls with two entrances: Porta Messina and Porta Catania. The town was founded under the name of Tauromenion in 358 B.C. by Andromachus and a group of Greeks, escaped from Naxos, a greek colony attacked by Dionisius I from Syracuse.

In 278 B.C. Taormina was conquered by Agathokles, the new tyrant of Syracuse, but in 212 B.C. the town subjected itself to the Roman rule to avoid being destroyed by the Romans. The town was given the name Tauromenium and it became a federated town of the Roman Empire. After the fall of the Roman Empire in 476 A.D. and the barbarian invasions, the town passed under the control of the Byzantine Empire. In that period Taormina, thanks to its strategic position, became one of the most important town of eastern Sicily; the town expanded, the population increased and the fortified walls built by the Greeks were reinforced.

In 902 Taormina fell to the Arabs, who destroyed the town and changed its name in “Almoezia” from the name of the caliph Al-Moez. But the Arabs brought not only devastation, but also developed agricolture, science and philosophy. The Arab domination ended with the norman conquest of Sicily; in 1078 Count Roger took the town and restored its previous name. Under the reigns of the Normans and the Swabians Taormina and the whole Sicily enjoyed a period of cultural development and prosperity.
The Reigns of Angevins and Aragoneses, who fought each other in order to take control of the island, was characterized by rebellions and heavy taxation which led to the decline of Taormina. In the 15th century Sicily’s throne passed to Bianca di Navarra, so a new Spanish domination was established, until 1713, when the island passed for a short period under the control of the Savoia and then of the Hapsburg of Austria.

From 1734 Sicily returned to the Spanish rule with the dynasty of Bourbons. In 1860 the island was liberated from the Bourbons by Garibaldi’s troops, and a year later was annexed to Piemonte.