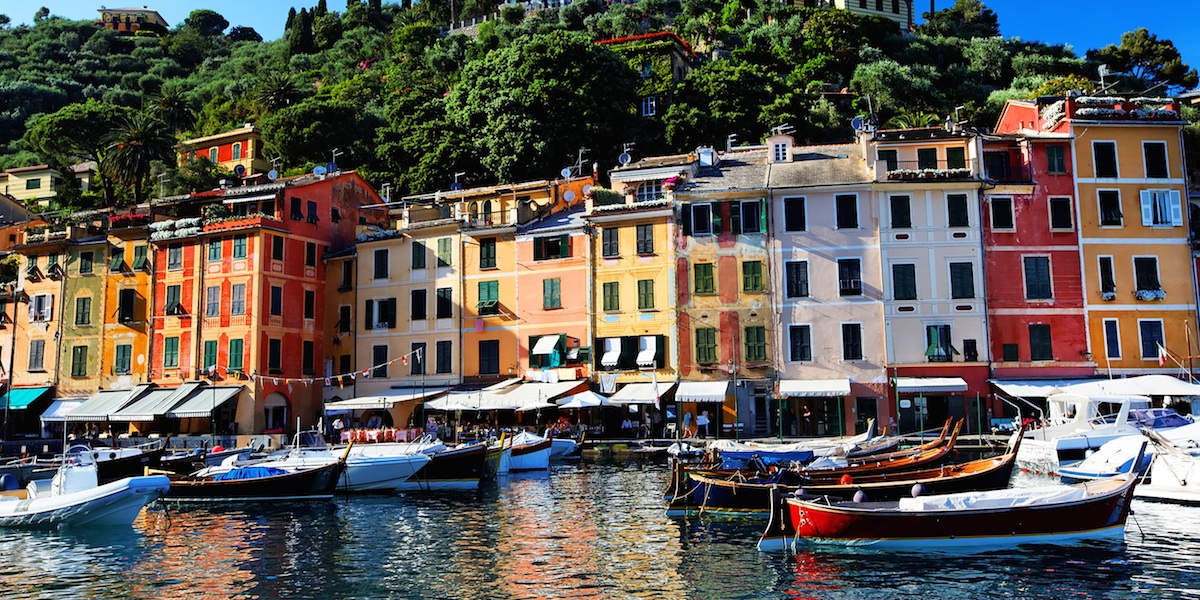 What to see in Portofino

It's like the terrace of a large hotel or a coffee or a seaside restaurant, a lounge of life and culture where, from the beginning of the twentieth century and then even more with the "dolce vita" (sweet life), the story has passed with a world of aristocracy, literature, art, cinema and luxury. As Edward, Duke of Windsor and Wallis Simpson, Rex Harrison and Lilli Palmer, Clark Gable, Kim Novak, Bergman and Rossellini, Elizabeth Taylor and Burton, Orson Welles, Soraya, Hemingway, Sophia Loren. For this reason, the square Piazza dei Martiri dell'Olivetta, known worldwide as the "square of Portofino" is counted among the historical places in Italy.

Defensive medieval stronghold, the castle bears traces that would assume the pre-existence of a Roman garrison.The magnificent building has hosted in the past, a famous German diplomat, Baron Alfons Mumm von Schwarzenstein, after became an honorary citizen of Portofino. The baron, with his wife Jeannie, stayed in the castle after retiring from a career as a diplomat. After his death, his widow Jeannie von Mumm continued to dwell in Portofino and, in 1945, was able to prevent the destruction of the city, at that time threatened by German troops. Inside the fortress, are set up now private events and exhibitions. The beautiful garden of the castle, with its panoramic view, is definitely worth a visit.

Located on the top of the promontory, the property is accessible by a ladder or, alternatively, by a short walk from the square Piazzetta di Portofino. The building has undergone many renovations, but the original nucleus dates back to Roman times. Despite its simplicity, the church is a place of worship loved by the inhabitants of Portofino, also because, at its core, is kept a relic belonging to the city's patron saint, San Giorgio Martire. Outside the entrance to the abbey is preceded by a beautiful courtyard made of white pebbles and blacks: here it is possible to witness an extraordinary panorama  that encompasses on one side the harbor, on the other the open sea.

Building dating back to 1300 belonged to the brotherhood of the Assumption. The slate portal is characterized by an element of great value: a half moon, placed on the top of the door depicting the Madonna with the Child and the members of the brotherhood.

There are several trails within the park. Among them, particularly interesting is the trip from Santa Margherita Ligure to Portofino: the path is an easy route and is part of the "Salita Montebello", is about 4 km long. After a steep climb full of panoramic views, during which also crosses the religious building dedicated to Madonna della Neve (Our Lady of the Snows), the road becomes flat and crosses beautiful countrysides. Following the appropriate indications, through a downhill path you will reach Portofino Mare.Equally fascinating paths are then the High Ring of the Park of Portofino, approximately 6 km long and the one that leaving from San Rocco reaches up to the "Batterie", 3.5 km long. This last path includes a section (the one that goes from the Batterie to San Fruttuoso) with hard walking, only suitable for experienced hikers.Besides the hiking in the park you can walk itineraries for families, guided tours and a full program of events for all tastes, from photography contests courses and workshops that focus on the sciences, the arts and crafts of the sea.

The center of International Outdoor Sculpture is located in the Castle of Baron von Mumm, in the Park of Portofino. Here there are the sculptures by contemporary artists such as Pomodoro, Costa, Messina and Chromy.

The path to reach San Fruttuoso of Capodimonte starts from via del Fondaco, near the police station, with a decidedly uphill trail, marked with two red round. Once you pass the hotel, the trail becomes a staircase that winds up surrounded by the vegetation. You pass the branch that leads to San Sebastiano, and thus arriving at the locality Palara where you will have to open a gate used to prevent the passage of wild animals, making sure to close it again once passed , the same operation is repeated later in the locality Cappelletta where there is another gate, once passed, the itinerary will continue to the right and after about 50 yards to the left, taking you in the direction of the houses of Prato (in case of doubt or misunderstanding of this text remember to follow the trail signs). From here you go to the Base O on the path that in this section becomes flatter, following the contour line of 270 yards, and allows a panoramic view of the bays below: the coast is characterized by high cliffs that in some sections jut out of the sea with altitude over 220 yards.Once passed the bay of the Englishmen, dominated by a fire signal station built in the 90s, the itinerary continues without crossing other paths up to the Base O, altitude 240 yards, a stopping point with tables and benches, after 1 hour and 10 minutes from the departure in Portofino. It is recommended before going to San Fruttuoso to follow the instructions placed on the left, going down in three minutes along a spur of conglomerate rock - up to a panoramic point that allows you to observe the whole south side of the promontory. From Base O the path to San Fruttuoso drops rapidly with hairpin bends up to the yard prepared for the landing of helicopters in the "Caèta", from here down among orchards and olive groves to the houses of the village to finally arrive at the monastery of Capodimonte. It reiterates and emphasizes that the path to be followed is well traced and locations of significant transit indicated by vertical poles signaling.