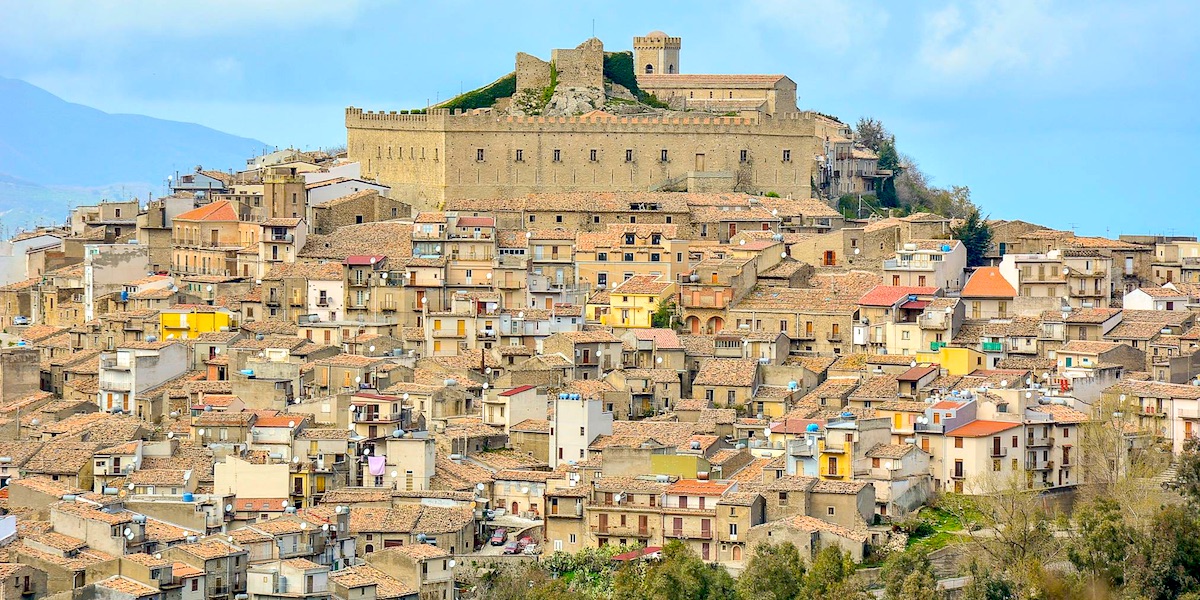 What to see in Montalbano Elicona

A typical Medieval hamlet, it seems to be in a picturesque labyrinth, an irregular and curvy urban fabric made of small houses of sandstone. Each corner of the old town centre has to be visited, captured, lived. Following the small streets and stairs, you could admire the Medieval blocks and various alleys that take you around the imposing Swabian-Aragonese castle, churches and noble buildings. One of the most famous places in Montalbano Elicona is the “Vicolo Placido Fiore”: a small street dedicated to Placido Fiore, who founded the charity activity known as Peculio and died in 1648. He used to “help poor people with his money”, especially during difficult periods for the village, when the population suffered from oppression and raids. The charity activity he founded went on during the following centuries since the constitution of the Agricultural Bank in 1887. Another characteristic street of Montalbano Elicona is the via Giovan Guerino who is remembered as a public defender during the Medieval period. It is known that he died during a battle under the gate that has his name, a few metres far from the chiesa dello Spirito Santo. Along the via Mastropaolo, the evocative portals of Casa Messina-Ballarino and Casa Matropaolo, stand out. The first one was built during the Baroque period by Irardi da Napoli, the second one was made during the 18th century by a local stone cutter. In 1912 they have been declared national monuments, according to the Cultural heritage Organization. Between the building Faranda and Bisagna there is one of the ancient gates of Montalbano Elicona: Porta di Terra. It was used by farmers who brought their products. If you want to recall the most important moments of Montalbano Elicona’s life, you won’t miss the Museo Storico-fotografico Eugenio Belfiore: live again the traditions, the customs, the local habits, arts and ancient crafts, festivals, fairs and events during the time. If you want to know more about history, you have to visit the Palazzo Aloisio, today a museum, one of the examples of noble house still intact from the first years of 20th century. Inside there are furniture, cooking tools, trousseau. On the walls there are the portraits of the ancient owners, surrounded by vintage floors and luxurious frescos.

The Montalbano Elicona castle overlooks and dominate the village. Its structure, dated back to the 12th century, was modified and enlarged between the 13th and 14th century, in obedience to Frederik II of Aragon’s wishes. It was possible to enter  the fortification by four gates: Porta Reale to the south, Gian Guarino to the west, Porta di terra to the east, Portella to the north. Each gate had a particular function: by the first one only the king Frederik could have access; the second one has the name of a warrior who died while defending the gate; the third one was a secret gate; the fourth one was for the working class. The castle is made of two different bodies: the oldest, presumably built during the Norman period, made of a rectangle (called mastio), protected at the middle of the two short sides by two imposing crenellated towers (a rectangular one and pentagonal one); the other body, built during the Aragonese period, in a lower position, is made of a quadrangular corral along the cliff. The castle consists of two floors, it has eighteen big and elegant windows on the outside walls on the top of Swabian embrasures and a large number of doors and gates. On the top of the Aragonese building there are guelph merlons, built during the restoring works of 1980s. In the interior you can remember the atmosphere of the ancient courts thanks to the big rooms; it is possible to admire the Real Chapel, exclusive privilege of the kings: it was a “cuba” of the Byzantine period dedicated to the Holy Trinity. Here there is the commemorative plaque in honour of Arnaldus of Villa Nova, doctor, alchemist and counselor of the Crown of Aragon. The castle, built as a defense, became in obedience to Frederik II of Aragon a real royal palace, leisure residence during the summer. It was used to make the king stays in Montalbano Elicona more comfortable and easier. He used to come to treat a disease (the podagra), using the oleaginous substances of the Tirone water. The castle belonged to several lords - the Lanza family (1396), among others - and then given to the Jesuits who made a monastery. From 1921to 1967, the castle belonged to the Municipality of Montalbano Elicona. Now it hosts the Museums of Weapons. If you reach the squared tower you will enjoy a breathtaking view of the castle, the village and the mountains that protect the southern part (Argimusco, Polverello, etc.).

Pleasant expanse of pastures and thousand-year old woods, esotericism and mysticism, breathtaking views: that is the Argimusco, an area that expands on an ample upland between 1165 and 1230 meters above the sea level, the only example of megalithic site of Sicily. In this territory the river Elicona originates and flows into the Tyrrhenian sea between the villages of Falcone and Tindari. During the centuries, along its flow, water mills were built used by inhabitants, who came walking or by donkey to take wheat to grind. Nowadays it is possible to admire rests of the ancient mills among the vegetation (wheels and walls). Megaliths are very impressive comparable to the so called menhir where Celtics used to celebrate their religious rituals. Enormous calcareous rocks with strange shapes and profiles similar to faces, animals, magic and ancient symbols. It is known that this rocks have been shaped by wind and rain. But is it possible that it was only the natural erosion to create the extraordinary effects of this enormous stones? Or have they been made by any mysterious prehistoric population? Some of them have characteristic and extremely evocative shapes; among the most remarkable megaliths, near Portella Cerasa there are two enormous, imposing and quite threatening stones which have an elongated shape (the first one is thinner and slimmer, the second one shorter and stronger): they represent the sexual symbols of virility and fertility. Not so far from here you will find the so called Aquila (Eagle) with its wings spread and its head pointed towards the South. Going to the North, you will enter the holy place, one of the most fascinating areas: in front of you you could see the Grande Rupe (Big Cliff), the biggest stone. On the East side you could see the profile of a man called il Teschio (the Skull) or il Siculo (the Sicilian). Among the several faces you could imagine in the rocks, there is one of them that will impress you: it is called l’Orante (the Prayer) or Dea Neolitica (Neolithic Goddess). You will see a figure with her hands joined, probably a preyer woman, 25 meters high. Since today no archeological study has been made, so it is impossible to date the area and its uses.

You will find it near the Castle, oriented towards the Argimusco. Arnaldus de Villa Nova, alchemist and personal doctor of king Frederick III of Sicily, says that it was built in 1310. Inside the ancient little church, dedicated to Saint Catherine of Alexandria, there is a statue made of marble representing the saint put on a precious base with bas reliefs, that looks up in the sky before being martyred, made by the Gagini’s workshop. The frontal part of the altar has a “Cena Domini” made by Guido Reni’s workshop. the façade has a beautiful Romanesque portal made of bare stone. At the top of the roof there are a Ghibelline merlon and two ribs for the bells.

It is the main church and it rises up in piazza Duomo. You will find it walking across several small streets from the Castle to Piazza Duomo, in the quartiere Matrice. It is the biggest church of the village and it is known as Basilica minore di Santa Maria Assunta e San Nicolò Vescovo, who is the patron. It is known that it has existed since the 9th-10th century, but the building we admire today is not the original one because during the time its structure and style were modified. It had a Latin cross structure and only one big central nave. In 1654 two aisles changed the orientation of the church. The three naves, decorated by wonderful chandeliers, are separated by solid pillars on which round arches open. Along the left aisle there are several paintings made by Sicilian artists representing the Virgin and some Saints. Looking up you will see the A-frame roof made of wood, walls with decorations, rose windows and plasters. Along the left aisle there are five minor altars and four altars and an entrance along the right aisle, while in the central nave there are some plaster medals representing biblical figures.  The church is full of fine works, the tabernacle on the altar made of golden wood decorated by several sculptures belonging to the Gagini’s workshop, among others. Inside the chapel on the right aisle, there is a wonderful marble statue representing St. Nicholas (1587) presumably made by Gagini. At the back, there is the bas relief made of marble representing some little angels with the miter in their hands. At the bottom of the statue there are four bas reliefs representing scenes of St. Nicholas’ life. There is also a wooden crucifix of the 15th century, a baptismal font made of stone; a Baroque canopy of the 18th century; a painting representing the Last Supper made by Guido Reni; a fine painting of the Assumption and precious vestments made of embroidered silk. On the outside there is a monumental bell tower made between 1665 and 1673 which has bronze bells; there is also a beautiful staircase that gives majesty to the church and a breath-taking view.

It dominates the square that welcomes you to the village and it is near the City Hall. Once it was given to Dominicans. The chiesa di San Domenico, better known as Santuario di Maria Santissima della Provvidenza, represents the heart of the religious life of the village. The interior has three naves separated by two rows of columns that end with round arches. On the main altar you can admire the wooden statue of the Madonna della Provvidenza, made in 1730 by Alessandro Pantano. It represents the Virgin who has Baby Jesus in her left hand, while with her right hand blesses.

In the quartiere Matrice, in the heart of the village, you will find the chiesa dello Spirito Santo. Built during the 14th century, this small church is made of a unique nave with three altars, three recesses made of sandstone with sculpted capitals. In ancient times, it was possible to admire some paintings dedicated to the Holy Spirit, St. Calogero and St. Francis of Paola and the wooden A-frame roof. The exterior has a nice façade characterized by a Romanesque portal with an arch that creates a play of architectonical elements.

Unfortunately, nowadays there are only some ruins of this church because of the earthquake of 1978. We know that it was built around 1100-1200. It has a rectangular plan with a unique nave and a transept marked by a vault made of stone. On the walls there were big recesses decorated by frescos representing holy figures. In front of the main façade there were some seats made of stone.