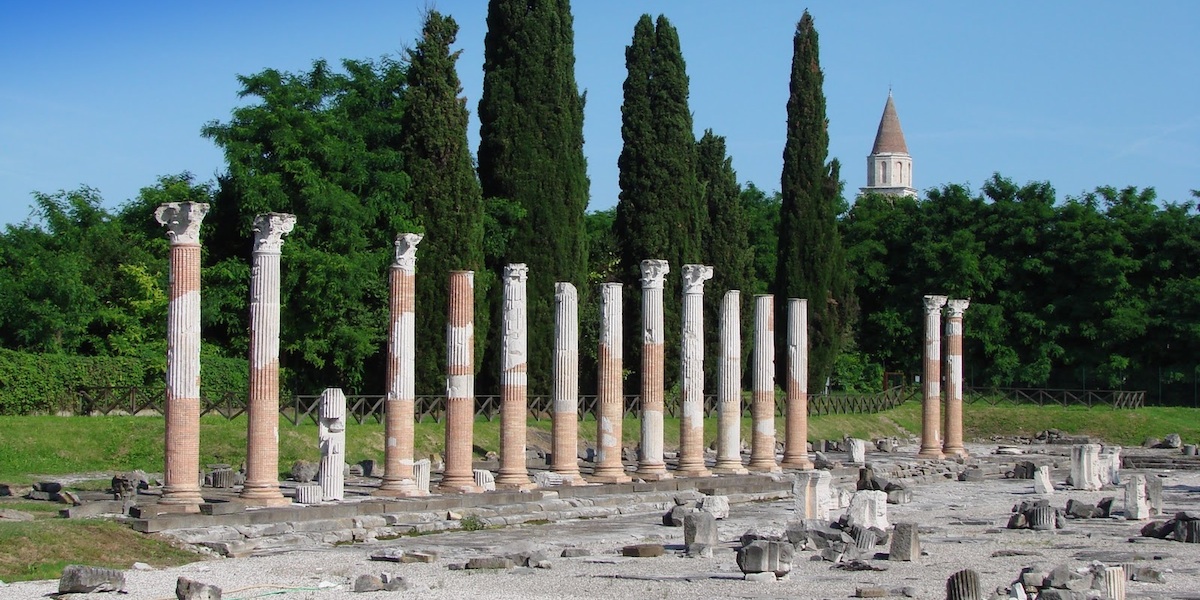 What to see in Aquileia

The Basilica of Aquileia is a blend of history, it tells, in the superimposition of architectural styles, the history of the city ranking itself as one of the most important religious monuments of Christianity. Commissioned by Bishop Teodoro in the fourth century, shortly after the edict of Constantine, was built on the remains of some Roman warehouses and was initially made up of two courtrooms with other small outbuilding environments and a baptistery. The mosaic floors of the courtrooms are still visible in the main nave and in the side of the present church, and for the conservation status (they were brought to light during the excavations of the early '900) and the richness of the representations, are among the most beautiful floor mosaics of the Christian West. Stand out the portraits of benefactors who, together with Theodore contributed to the construction of the basilica, some of the stories of the Old Testament and the representation of a sea full of fish from the sparkling colors. On the first plant, at the end of the fourth century, was built a second building completely destroyed in the middle of the fifth century with the arrival of the Huns; remains of pavements and structures of a quadrangle are still visible in the crypt. The facade belongs instead to the new large basilica that was built in the second half of the fifth century as well as the foundation of the columns and the mosaics of the presbytery. The largest expansion was built between 1021 and 1031 by the patriarch Popone who attributed the Romanesque shapes to the transept to the apse and to the restored crypt. With the new interventions after the earthquake of 1348 were made the acute arches and the typically Gothic capitals and finally with the Renaissance the Venetians, masters of the city, enriched the whole presbytery.
Today the church looks like a majestic complex, which includes the front of octagonal baptistery of the fourth century connected to the facade with a pillared porch and the so called "chiesa dei pagani"( church of the pagans), an eleventh-century building with a rectangular plan consisting of two courtrooms where the catechumens gathered. Worth a visit the fifth-century mosaics preserved in the "Süd Halle", the south courtroom of the baptistery.
Entering the church, divided into three naves with apses, you will be fascinated by the perfect harmony that is created in the contrast between the simplicity of the system characterized by the colonnade and the sumptuousness of the flooring extremely detailed. Worth seeing the inner and outer crypt, called "degli scavi" (of the excavations) that is accessible to the left of the entrance, where the overlap of remains of walls, columns, strips of flooring, make better understand the transformations undergone by this important complex. On the left stands the bell tower, a massive stone tower of the eleventh century lightened by mullioned windows and restored in the sixteenth century with the addition of the bell pine cone typical of Friuli, where is possible to climb to enjoy the view. Behind the apse of the basilica there is the "Cimitero dei caduti” (Graveyard of the Fallen) where are buried the Italian soldiers fallen during the First World War, a marble plaque preserves steps of the Psalms of Gabriele D' Annunzio.

The National Archaeological Museum of Aquileia, founded in 1882, is one of the most important museums which preserve artifacts from the Roman era. The 12 exhibition halls are set in nineteenth-century villa Cassis Faraone and collect ceramic objects, jewelry, gems, coins and household goods, the result of private donations and excavations that took place between the nineteenth and twentieth centuries. Of particular relevance is the collection of stone works that ranges from portraiture to monumental sculpture, from bas-reliefs to the funerary stems that represent the professions of the deceased celebrating the deeds after the death (see those of brave soldiers or those of the carpenter, of the blacksmith, of the tax collector...).
In the external galleries and in the garden are housed the sections devoted to the sepulchral monuments (among which stands out that of the family of Celsii) and that of the mosaics originating from the domus of Aquileia and from some public buildings (perhaps the baths and the circus); among the most famous there is the mosaic called " del fiocco" (of the bow) which depicts a vine and an ivy tied with a bow and asaratos oikos, the representation of the floor of a dining room where are thrown the remains of a lavish banquet, both of the first century BC. Remarkable also the rooms devoted to naval exhibits among which stands out a small boat that was found in 1972 near Lisert (Monfalcone).

Recently renovated, it is worth visiting the Museum of Early Christian of Monastery, housed in the former convent of the Benedictines. The convent was suppressed in 1782 and turned into a farm, was built on the remains of a large Christian basilica, founded in the fifth century. The remains of this imposing building, came to light during the excavations at the end of nineteenth century and resumed immediately after the war, allow to reconstruct the rectangular plan of a large hall with a polygonal apse. Apart from the building structures, are preserved the beautiful mosaic floor of the church interior and a stretch of pavement that covered the the square in front. The museum also preserves the beautiful mosaics from the presbytery and from the apse of the Basilica of Beligna (destroyed) and a wide selection of exhibits that tell about the Christian roots of Aquileia from the fourth to the eleventh century. Remarkable are the collection of early Christian inscriptions (among the most famous there is one dedicated to African Restutus who came to Aquileia and was so in love with her that he no longer wanted to go away), the sarcophagi and the remains of many mosaics from churches and private chapels, the inscriptions and bas-reliefs (among which stands out the famous portrait of Santi Pietro e Paolo (Saints Peter and Paul) attributed to the fourth century.

The Sacred Way was created in 1934, paving the amount of the excavations on the ancient river Natissa that, in this portion, measured about 48m in width. Today, this route allows you to take a leisurely stroll through ancient friezes, pieces of columns, marble slabs, inscriptions and remains of statues surrounded by greenery.
The street has become in itself a monument and leads to the River Port highlighted in the 30s of the twentieth century. The big infrastructure was built in the early first century AD with a 350m long quay on two levels (to allow the landing of boats of different sizes) made with Istrian stones. You can still see the landings with storage warehouses, the moorings of boats made of horizontal rings and vertical joints, part of the cobbled streets and of the stairways that enabled to deliver the goods up to the center of the city, near the Forum. Of the third century are the ruins of the walls superimposed on the quay for defensive purposes after the invasion of Maximinus the Thrax in 238, further restoration works date from the second half of the fourth century. The port was an important commercial crossroad active until the fourth century.

Coming to Aquileia by Via Giulia Augusta, one can not but see the remains of the Forum on both sides of the road. The excavations in this area, very important to fully understand the history of the Roman city, began in the 30s of the twentieth century and continuing today. The Forum was the central and focal point of every Roman city, it was built in the middle of the two main roads, the Cardo and the Decuman, which here intersected perpendicularly. On the large rectangular square, partially arcaded, overlooked shops, taverns, buildings with civil functions and the forensic basilica, the meeting place of the most influential people of the city, seat of the court where were discussed the political and economic affairs.
The basilica, a large building over 90m long with an area of about 2250 square meters, consisting of a large hall with two apses and divided into three aisles by rows of columns, is now partially visible in the archaeological area, as well as a part of the arcades (the south and the east ones), the channeling perimeter which allowed the rainwater runoff and the outflow of wastewater, part of the karst rocks that paved the square. The many finds unearthed during the excavations are kept in the National Archaeological Museum.

A dip in the Roman Aquileia can be done by walking along the Via Julia Augusta. At the intersection with Via XXIV Maggio stands the imposing Great Mausoleum (17 m high), a funerary monument of the early first century AD discovered in 1891 in the nearby town of Roncolon di Fiumicello and here reconstructed in 1956. The structure consists of a large nut (the death chamber) placed on steps and surmounted by a cuspidated votive shrine, which culminates with a pine cone (funeral symbol), placed to protect the portrait of the client for the tomb. The statue by now headless retains some elements (the toga, the seat with the fasces, part of an inscription) that allow to recognize the character as an important magistrate. Further down the road you arrive to the burial ground, a group of five large family tombs perfectly preserved. The funerary monuments, which include both burial tombs that cremation, can be traced back to a period between the first and fourth centuries. To each family belongs a walled enclosure within which are collected the tombs of several members with stones, altars and sarcophagi.
Can be recognized, in succession: the Tomb of the Statii, the tomb called “Degli sconosciuti” (Of the strangers) because it lacks any inscription on tombstones, the tomb of the Julii, characterized by a decorated pyramid with intertwined dolphins symbol of Poseidon, the Tomb of the Trebii with a series of urns and sarcophagi ranging from the first and third century AD, the tomb of Cestii only partially excavated. Still on the Via Giulia, at the intersection with Via Popone, overlooks the archaeological area dedicated to the remains of Roman houses and two Early Christian oratories of which are preserved part of the walls and mosaic flooring.
Going further, by via dei Patriarchi, you will come across those who were the markets of the city and in the remains of the two city walls dating from the third and at the end of the fourth century.