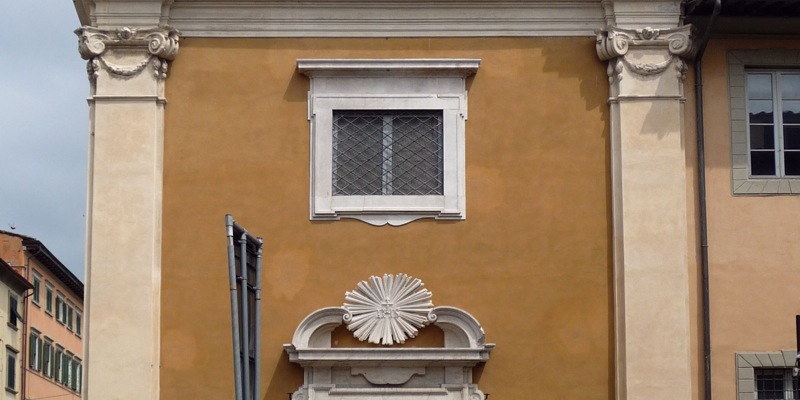 Church of Sant'Anna
The church and nunnery were built by Benedictine nuns from S. Paolo at Pugnano, near Pisa, beginning in 1407. They had first moved to S. Anna al Renaio in 1275 and from there to S. Maria di Barbaricina.

The Church, consecrated in 1427, was renovated by Girolamo Ammannati in the early 16th century and opened once more for worship in 1584. Between 1741 and 1747 it was once more completely re-structured by the two Melani brothers, architects and painters from Pisa, giving it the appearance we see today. The convent was suppressed in 1786 and in 1809 was converted into a boarding school for girls; in 1987 it became the home of the Scuola Superiore di studi universitari e di perfezionamento di Sant’Anna.

The decoration of the facade is simple, with stucco capitals and mouldings, a pediment with vases at the corners, a carved marble doorway and window above. The bell-tower is in brick with a cusp-shaped roof.

Insideis a single hall preceded by an atrium with cross-vaulting, resting on four pillars. There is an organ, built in 1850 by Nicodemo Agati, in the gallery above. The windows are decorated with stucco frames, and there are twelve insets in white stucco depicting Saints and Prophets, executed by Giovanni Frullani in 1747. All the other decorations are in Stucco.

Along the walls are four altars by Andrea Vaccà, dating from 1740, with paintings from the same date The ornate main altar, with angels above the pediment, is in stucco and marble; it was built for the large early 14th century wooden crucifix from the Burgundian school, once in the Cathedral and now on display in the Opera del Duomo Museum.


Are you a local? What do you think about Church of Sant'Anna? Login to suggest it!

ADDRESS: Via Carducci, Pisa
OPENING HOURS : Open for special events organized by Sant'Anna School only.
YOU MAY ALSO BE INTERESTED IN...
Church of St. Joseph