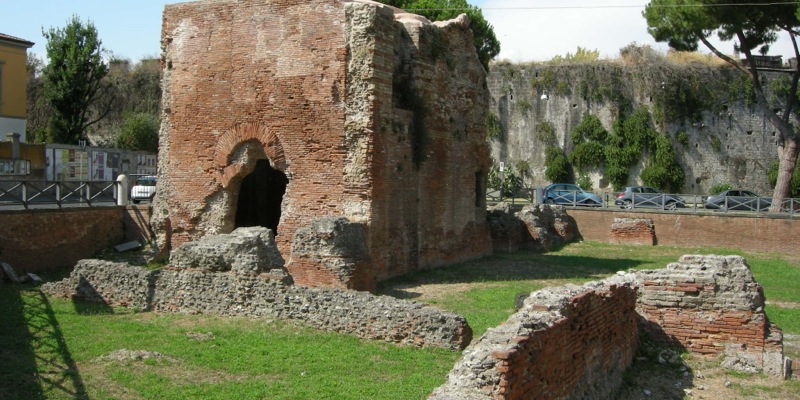 Nero Baths
2 local people suggest it The spa at Porta a Lucca, traditionally known as terme or "Bagni di Nerone", are situated in what must have been the north-western sector of the town in Roman times, now just inside the medieval walls between the S. Zeno Abbey and Cathedral. The ruins were identified in 1548 when they were first defined as a laconicum, a room for sweating; its attribution to Nero goes back to the 13th century, and is part of the longstanding tradition by which relations between Nero and Pisa were very close.

Today examination of the building techniques, the structural characteristics and material data enable us to date the building to the final twenty years of the 1st century AD and link it to the Venuleii family, important in Pisan affairs between the 1st and 2nd centuries AD. Now the above-ground part of the baths are in disrepair and only a portion of their floor-plan can be discerned. Part of the raised portion and the roof of the sala ottagona arethe best conserved part to have reached us, thanks also to numerous and substantial repairs.

At present the scarcity of data concerning the urban plan of Roman Pisa makes it impossible to say how the baths at Porta a Lucca related to other buildings. Naturally, new data is forthcoming from many the excavations in the city, such as those in via Galluppi – via Piave, where the remains of a building from the Imperial age emerged, built over pre-existing structures; it was finally abandoned between the end of the 2nd and the second half of the 3rd century AD and the area, only occasionally visited to recover building material, became a graveyard in the 4th century AD.


Are you a local? What do you think about Nero Baths? Login to suggest it!

ADDRESS: Largo Parlascio, Pisa
YOU MAY ALSO BE INTERESTED IN...
Door to Lucca