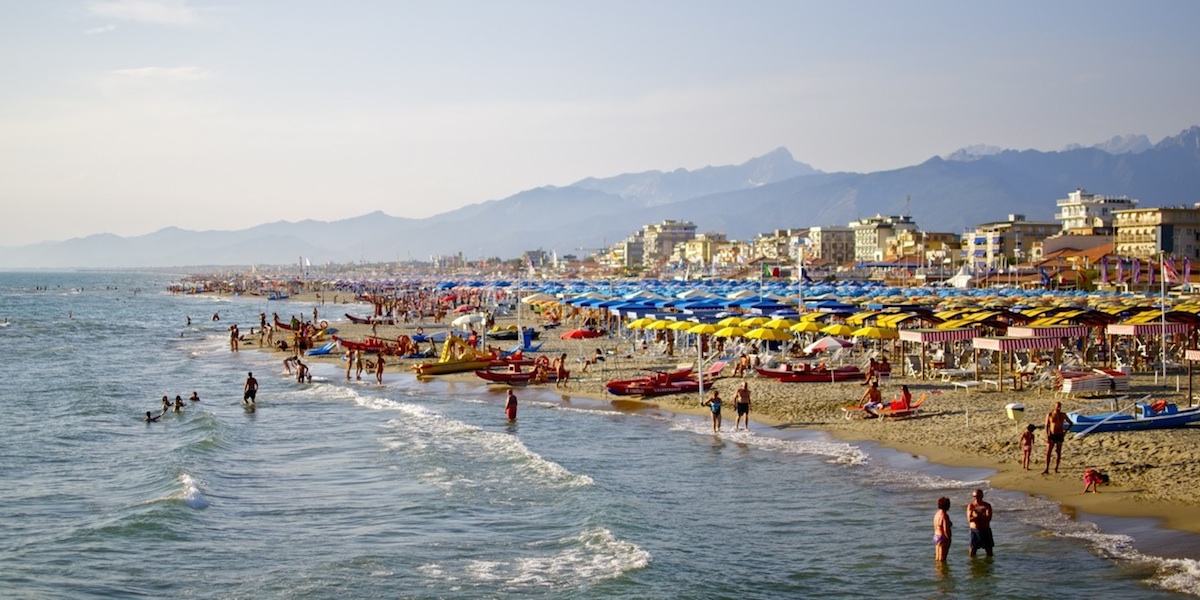 What to see in Versilia

To spend a day between brands and exclusive clubs or to relax by the pool with a massage by the sea, Forte dei Marmi is the perfect place...if ever you're willing to pay for vip services that this city offers to its tourists. Renowned for its boutiques, the historic bathing, the outdoor cafes, the restaurants offering refined dishes, nightclubs and discos, Forte dei Marmi is definitely the most fashionable resort of Versilia. In the luxurious villas that characterize the shady and silent paths, live actors, singers and sportsmen that it is not uncommon to encounter through the streets of downtown. At the center of the country there is the eighteenth-century fort, from which the town takes its name, which today houses the Museum of Satire and Caricature.

The territory of Camaiore is perfect for all those travelers who love nature, good food and tradition: long walks through the olive groves on the hills and the trails of the Apuan Alps, small historical jewels in the villages and in the well-preserved medieval churches; gastronomic itineraries in the Tuscan tradition tasting the Tuscan typical products of the area.
In addition to visiting the town of Camaiore downstream, the municipal area is studded with numerous villages among which are Monteggiori, site of an ancient castle, Gombitelli, famous for its artisan cured meats, the towns of Casoli and Metato placed facing each other, on the sides of the creek Lombricese, a perfect place to take a summer picnic and cool off with an icy dip walking among the ruins of gunpowder and pasta factories of the eighteenth-century.For lovers of nature and history is a must the prehistoric shelter of Grotta all’Onda, a large cavity that opens into the rock at the foot of Mount Matanna, reachable by a walk of about an hour, accessible to all, along the path 106 that starts from the locality Trescolli.
The territory of Camaiore is dotted with ruins of medieval castles, among which are that of Peralla and the fortified village of Montecastrese which is easily reachable going down from Metato or going up from the path of the mill Candalla. For those who want to hike there are many trails that from the hills reach the peaks of the Apuan Alps (mountains Prana, Matanna , Gabberi, Penna, etc...).

Taking the road foothills of Via Pietra in Padule along the Massaciuccoli Lake on the eastern shore, you will reach the eponymous village which houses one of the most beautiful complexes of Roman era of northern Tuscany.
The archaeological site is divided into two large buildings, one of rustic style (home of the factor, of the slaves working in the property and used for productive activities and, in part, for the reception of travelers) in the portion along the road downstream and a private otium villa (the residential part of the complex) higher up on the hill where is located even the medieval parish church of San Lorenzo.
The visit can begin in the valley where, in the pavilion Guglielmo Lera (a museum in the rustic building), is explained the entire complex and is possible to see a selection of objects that characterized everyday life in Roman times. In front of the pavilion, a tensile structure protects the remains of several environments that emerged in recent archaeological excavations (2012). Going up among the olive trees a short path leads to the villa which still retains, among others, the remains of a large thermal plant. From the terrace you can admire the impressive summit panorama that encompasses the lake and all the coast of Versilia, on a shiny day, are clearly visible on the left the monuments of Piazza dei Miracoli in Pisa and on the horizon will appear the coast of Corsica!

Nature lovers and ornithologists can not miss a trip on Massaciuccoli Lake. Within the area of the Natural Park of Migliarino - San Rossore, the lake is the largest humid area of Tuscany and still retains the wild charm of the swamp and lacustrine environments.
The area is famous for the more than 260 species of birds traveling through or nesting among the sedges and the rare vegetation, in a unique habitat particularly attractive in all seasons. Going from Massarosa is possible to reach the natural oasis Lipu in Massaciuccoli location along the eastern shore of the lake, here a system of walkways on stilts allows to venture into the swamp and to access to a number of equipped areas for birdwatching or rent canoes and kayak to advance into the different channels that intersect along the shores of the lake.
The managers of the Oasis are very active and organize events throughout the year, in particular, do not miss the ride with the electric punt and the guided tour to discover the flora and fauna of the lake, in the summer evenings is possible to admire the spectacle of falling stars that are reflected into the water!

The cave Antro del Corchia is the most important karst complex of Italy. A few minutes from the village of Levigliani, the cave is located on the slopes of Mountain Corchia and extends along 70km of tunnels and shafts with a total elevation of 1200 meters. The cave is still partially unexplored, but the picturesque scenery, the particularity of the concretions, the unique presence of mercury in the native state and the presence of one of the oldest quicksilver mines of northern Tuscany (known since 1153), makes it one of the jewels of European speleology. The guided visit itinerary stretches for 2km and takes about 2 hours, in the month of August by booking you can also make nightly visits.

Infamous for the Nazi massacre of August 12th 1944, where were burned to death 560 people in the town square, St. Anna di Stazzema is today a place of memory and remembrance of contemporary history and a symbol of peace. The Historical Museum of the Resistance offers through movies, testimonies of the survivors of the massacre, photographs, paper documents, a true story of the period between 1940 and 1945 in Tuscany and in particular along the Gothic line which passed right in Versilia. A striking stop. The museum organizes guided tours by appointment.

Viareggio is the largest city in the Versilia (65000 inhabitants). It has always been famous for beach tourism, is a perfect destination for those who choose to spend a day of total relaxation by the sea in one of the many establishments equipped with umbrellas, deckchairs, sunbeds, swimming pools, bars and restaurants or for those who like more a "wild" tourism  on the long free beach in the dunes of the park Migliarino Massaciuccoli San Rossore.
Walking around the city you can admire the many Art Nouveau buildings that conserve original plants and decor (among the most famous, the ceramics by Galileo Chini), shop in the covered market in the city center and along the Promenade, walking or cycling in the large parks (the "Pinewoods") or on the pier that runs alongside the marina.
For art lovers, is worth visiting the GAMC (Gallery of Modern and Contemporary Art), Matteucci Center for Modern Art and the Museum of Contemporary Art Carnevalotto. If you are arriving during Carnival in Viareggio is highly recommended to immerse in the euphoria that spreads throughout the city and participate in one of the masked courses that on Sunday invade the sea avenues with giant papier mache allegorical constructions.

Municipality close to the Apuan Alps, Seravezza owes its name to the junction of the two rivers, Serra and Vezza, where the village unfolds. Of particular value is the recently renovated Medici complex which includes the building, the chapel, the gardens, fish ponds and the grand-ducal stables. The palace now houses the municipal library, the historic archive and the museum of material culture, where are regularly held exhibitions of painting and photography. The stables are used for concerts, conferences and theatrical performances. The municipal area is full of small towns and Romanesque churches, among which stands out the San Martino di Azzano: built around the year 1000 and restored in the twelfth century, in the sixteenth century had the intervention of Michelangelo, who designed a porch (which was destroyed), the central rose window and the aisles.