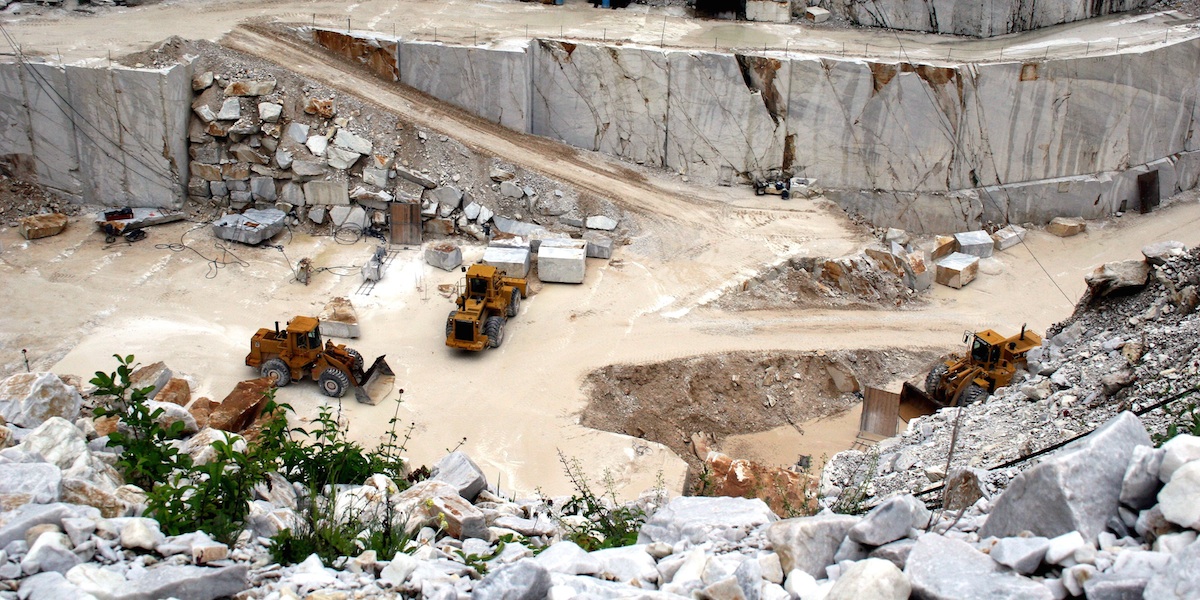 What to see in Quarries of Carrara

Fantiscritti is one of the leading marble quarries of Carrara, here is extracted the white statuary marble of Bettoglio, the light white marble of Battaglino and of Canal Grande and the ordinary white of Fantiscritti. The name refers directly to the millennial activity of the quarry: a Roman bas-relief carved in marble and depicting three male figures "fanti" (infantry soldiers) (by some identified with Jupiter, Hercules and Bacchus) and the Latin incision "scritti" (written), (today the original is kept in the museum of the Academy of Fine Arts of Carrara).
It's advisable to visit the quarry with the advantage of a guided tour, especially if you choose to do it on a weekday when the quarries are in full work activity and it is not always possible to enter individually. Tours depart by bus from Carrara (one of the starting points is the motorway exit) and going up to the Apuan Alps allow you to admire the 30 active quarries in this basin, which changed the Apuan slopes shaping them with cut sides and steep streets and making them completely whitish.
Once at the quarry, you can watch the various phases of the work of marble: cutting, loading, transportation. The detailed tale of the activities and of the hard life of the miners is described in the museum created by Walter Danesi, where is rebuilt the typical house of the quarryman, his tools, the clothing, and where are explained the techniques that in the course of the centuries have characterized the extraction.From the use in Roman times and throughout the Middle Ages of the mallet and of the chisel, creating a rift within the natural grains of the rock, allow the insertion of wedges then soaked to the detachment of the block, to the use of black powder since the eighteenth century, up to the use of helical and diamond wire that allows the cutting of large regular blocks eliminating the waste material that was created with the explosive.
Is no less interesting the history of transportation in the valley of the blocks. The oldest technique is that of “lizzatura”, which is fully described in the museum and which costed the lives of many miners along the slopes of “lizza” still visible. You can also admire the Ponti di Vara, the large suspended arches of the private railway which was built between 1876 and 1890 for rail transport and included 11 stations connecting major mining centers to Carrara. Abandoned in 1964, the railroad was already a tourist attraction in the early twentieth century, at the request of aristocratic visitors, passenger wagon for 25 people could be attached to the freight wagon to make the tour of the caves.
Today the transport takes place exclusively on the road and you can notice the constant coming and going of trucks that come up from the tops arriving to the piers of the port of Carrara. The magnificent scenery of Fantiscritti is regularly used as a scenic backdrop for theater, concerts and other events extremely suggestive.

A truly amazing experience is to enter in the largest tunnel cave in the world. The quarry Ravaccione, still active, is an immense chasm carved directly into the mountain known as the "Cattedrale di marmo” (Cathedral of Marble), for the unique show offered by high white walls. The quarry is accessible from the square of Fantiscritti with a first stroke of about 600m length to be covered with a shuttle. Inside you are equipped with safety helmets and you need to diligently follow the instructions of the guides (also just for the only preparation is worth bringing the kids that will love that!). The tour allows you to discover the different phases of the extraction of marble, watching closely all the machinery used. The quarry occasionally hosts exhibitions of contemporary sculptors.

The village of Colonnata is the settlement more closely related to the processing of marble. 6Km from Carrara, the village is in the center of the homonymous marble basin, and was founded in Roman times (40 B.C.) just to house the slaves used for mining activity. What is astonishing coming to this small town set against the rocks is the intensive use of marble, used like any other building material, easily available and at low cost. It is not surprising to find the marble in the walls, in the doors, in the windows and in the doorposts of houses, placed in pavements of roads or used to pave an entire yard on the southern part of the village.
Still the marble is what gives the so special taste to  the IGP “lardo” (bacon fat) famous all over the world. Obtained by letting it keep for more than 6 months inside the lard marble basins (called "conche") coated with garlic, rosemary and salt, combined with a loaf of bread and a flask of wine, the lard of Colonnata, which has now become a much sought product, was the main food of the diet of the miners. There are several shops in the village where you can taste and buy this delicacy.
Among the numerous quarries in the area of Colonnata, some of which are still cultivated, the most famous is that of "Gioia Calagio", known for the particular step processing and for the veined marble, bardiglio marble and guilloche pattern. The oldest and most monumental is instead that of Fossacava, about 1km downstream from the village, the site is bonded as archaeological resource for the discovery of numerous findings (including tools, votive objects and daily use objects) and for traces of processing that have allowed archaeologists to reconstruct the extraction techniques of the Roman age.

Collected into a single museum tour there are all the elements that contribute to the discovery of the culture of marble and of its territory. In the museum is possible to find the history of the marble quarries of the Apuan Alps, from Roman finds to those of industrial archeology, you can discover the techniques of mining and processing, as well as the use of marble in the architecture of the medieval city up to the handmade creations and contemporary art. Inside and out in the garden, the museum houses a large section devoted to modern sculpture in both marble and bronze, tin and gypsum. Periodically are set up temporal thematic exhibits, for more information, refer directly to the dedicated website.

Carrara develops along the creek Carrione, downstream of the natural amphitheater of the Apuan Alps. The town was established as a municipality in the mid-thirteenth century, it passed over the centuries under the domination of Pisa, Genoa and Milan, finding its heyday under the Malaspina and Cybo Principles between the fifteenth and sixteenth centuries. Estense dominion in the eighteenth century, from the late nineteenth century it became the cradle of the anarchists who contributed much to the anti-fascist resistance during the Second World War (Carrara was the strategic center on the Gothic Line), from which the name of "anarchic city".
Worth a visit the Malaspina Castle - Palace Alberico Cybo that retains much of the original plant with stone towers, walkways and loggias of view. Today, home of the prestigious Academy of Fine Arts, famous worldwide for having trained some of the most well-known modern and contemporary sculptors, the castle also houses a museum section of archaeological finds (including the bas-relief Fantiscritti) and of marble works of medieval and modern times.
On the occasion of the Biennial of sculpture, the city is transformed into a large open-air museum that as well as streets, squares, institutional settings, manages to revive the remains of industrial archeology such as some of the historic sawmill and artistic workshops of marble now into disuse. The event is also the driving force for a variety of events, from sculpture performances to theater shows, temporary exhibitions and workshops. Walking through the old town is worth a visit the beautiful square Alberica, bounded by colorful buildings and partially paved in marble. It is worth visiting the Cathedral of Sant’Andrea (St. Andrew) built entirely of white and gray marble between the eleventh and fourteenth centuries, with the magnificent rose window in Gothic style which adorns the facade. in In the city there are many circles and small places frequented by anarchists and artists where you can still enjoy the true spirit of these lands and sip a glass of Candia, the locally produced wine.