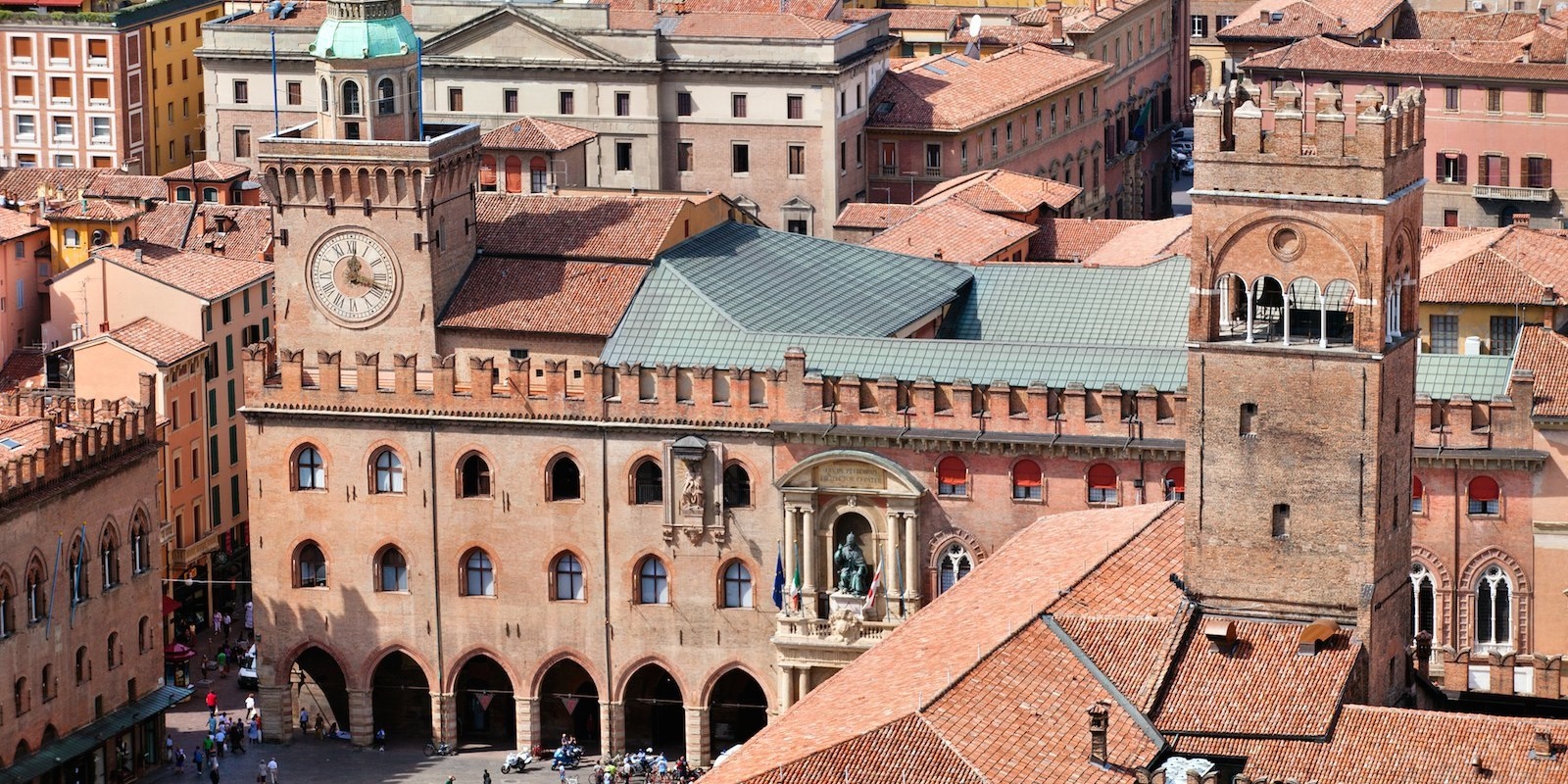 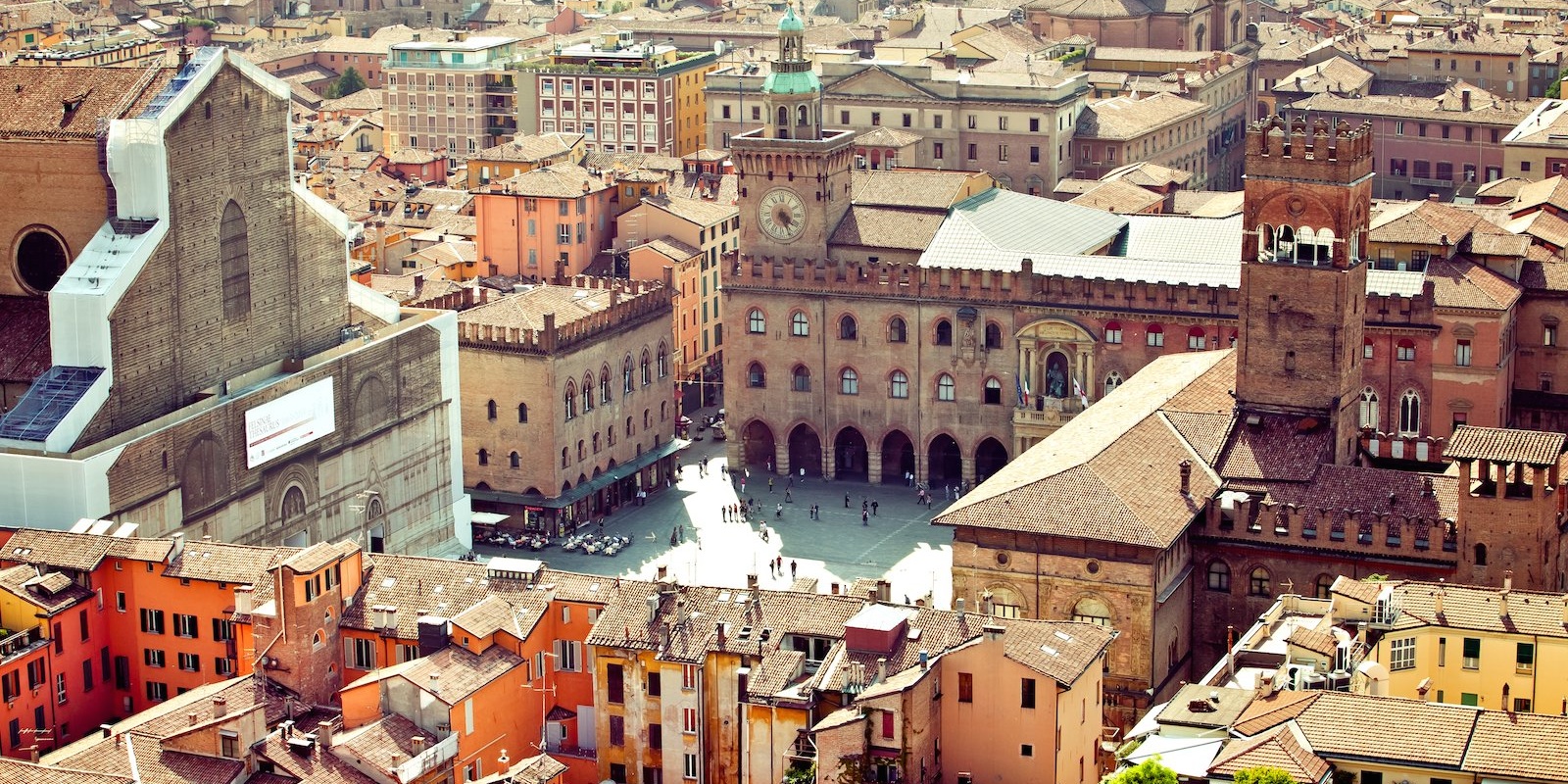 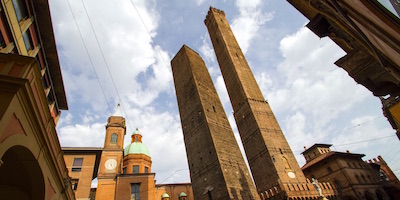 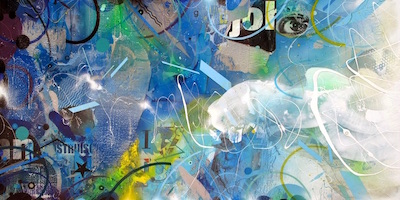 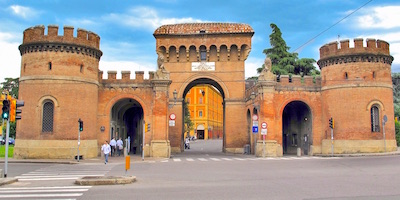 The Libraries of Bologna 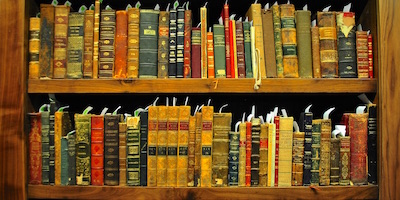 An Etruscan settlement first, then Gallic, Bologna was also a Roman colony and, later, a Roman city. Inside its walls - of which only a few ruins remain today - the first University in the world was established, in the 11th Century.
A main characteristic of the city are its porticoes that in the center reach a total length of about 23 miles, thus rendering Bologna the city with the most arcades in the world.

Another of Bologna's defining traits are its towers - in the Middle Ages they were as numerous as two-hundred. A tour of the Emilian capital commences in Piazza Maggiore, a rather large piazza that was originally a market. The Piazza  has always been the heart of the city, as well as the venue for civic and religious events and celebrations. It is flanked on one side by the impressive Basilica of San Petronio, with its incomplete façade; despite its magnificence, the Cathedral of San Pietro plays the role of Duomo. Also in Piazza Maggiore are the Palazzo del Podestà, the Palazzo dei Notai and the Palazzo dei Banchi.

Piazza del Nettuno, attached to Piazza Maggiore on its northwest, exhibits the Fountain of Neptune and its bronze statue of the god Neptune, by Giambologna. The most famous of those raised in the Medieval Ages are the two towers, Asinelli and Garisenda, offering a fabulous panorama over the city (that is, if you can handle the climb to the top). Not far away is Piazza Cavour, with its porticoes and a gallery of beautifully-colored frescoes.

In the area directly behind San Petronio, you can visit the Church of San Domenico on the homonymous piazza, one of the most important monumental complexes in the city, with paintings and sculptures of great import.
The Santo Stefano Complex (referred to as "the Seven Churches" by locals) is, rather, a place of exceptional historic and religious interest, and is divided into seven holy buildings: churches, chapels and a monastery. Santo Stefano lies in the lovely same-named piazza, site of concerts in summertime, and an evening rendezvous point preferred by students year-round.
The Church of San Giacomo Maggiore impresses for the elegance of its lateral colonnade and interior frescoes. Also in the area is the National Art Gallery, where it is possible to see works by Giotto and his school, Guido Reni, Guercino, along with the famous Ecstasy of St. Cecilia by Raffaello.
Just outside the walls and in the hills is the Sanctuary of the Madonna of San Luca, the most important sanctuary in the history of the city; it is connected to the city by a long arcade that begins in Piazza di Porta Saragozza. The Complex of San Michele in Bosco, in Bologna's environs, is equally-worth a visit.

Walking along the streets that line the River Reno, we can reach Casalecchio di Reno that neighbors Bologna; the River, traversing Casalecchio, is channeled by the Reno Lock, constructed 1100 and later strengthened.
Sasso Marconi is a town that goes back to Etruscan times, of which remain a few tombs; meanwhile an impressive aqueduct testifies to the Romans' passage. Marzabotto, also an Etruscan-archaeology trove, was also the site of a Nazi massacre of over 1,800 Italians during the Second World War, to which a Memorial to the Dead has been dedicated.

Budrio is an interesting ancient city where we can see signs of the Roman and Medieval periods, particularly in its urban plan. Budrio is rather well-known around the globe for the musical instrument invented by Giuseppe Donati, the ocarina. Learn more about it at the Museum of the Ocarina and Terracotta Musical Instruments. Also here are the Puppet Museum, the Domenico Inzaghi Municipal Art Gallery, and the Archaeological and Paleoecological Museum.

Outside the city walls, in Bagnarola, it is possible to visit the complex of the Bagnarola Villas, also called “the Versailles of Bologna;” of these villas the Floriano stands out for its dimensions and architectonic beauty.
Finally, take an itinerary to explore the Parish Church of Cento; Castello d’Argile; Imola with its historical center; San Giovanni in Persiceto; San Giorgio di Piano; the village of Bentivoglio with its impressive fortress; and Medicina.
Attractions 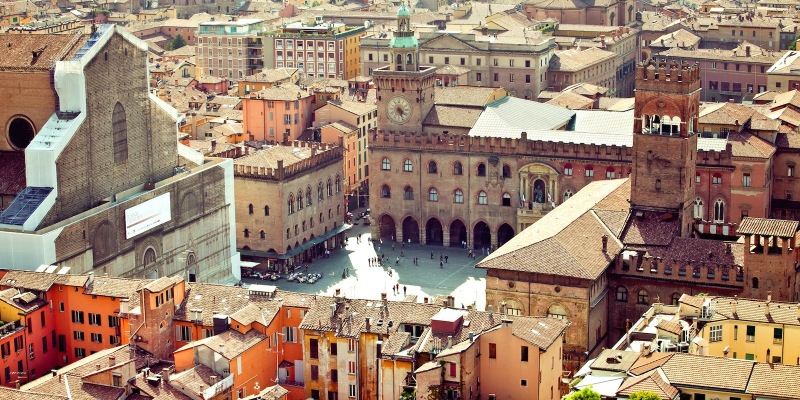 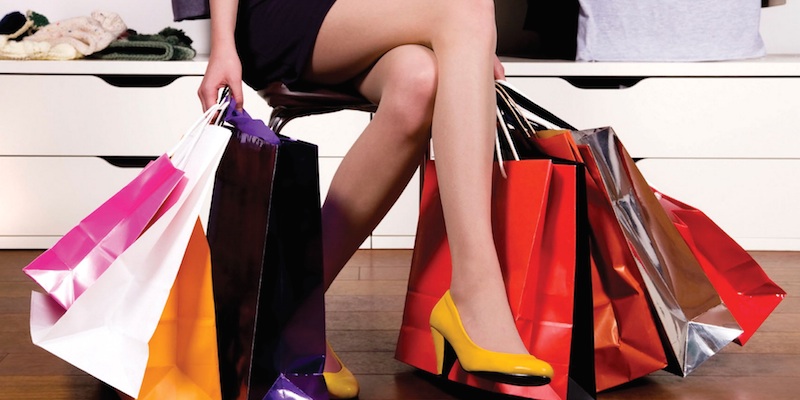 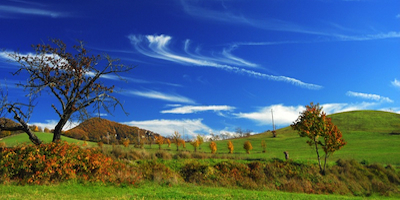 GETTING AROUND IN Bologna

Bologna is served by an excellent public transport system run by ATC (www.atc.bo.it). The train station is connected to the city center by the line 30 and the line 21. The historic center of Bologna is limited to traffic: cars and motorbikes can not circulate inside except for special permissions. The best way to see the city is then by public transport, on foot or by bike (that can be hired near the train station).